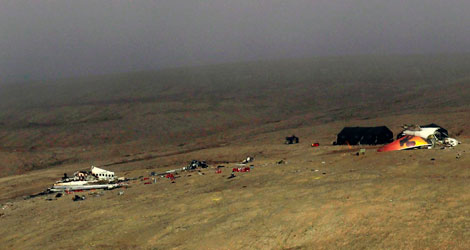 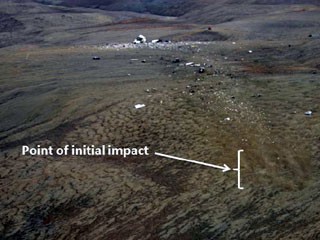 Bradley First Air flight FAB6560 , Boeing 737-210C combi 2 aircraft departed Yellowknife (CYZF), Northwest Territories, at 1440 as First Air flight 6560 (FAB6560) on a charter flight to Resolute Bay (CYRB), Nunavut, with 11 passengers, 4 crew members, and freight on board.
The crew initiated the in-range checklist at 1632 and completed it at 1637. At 1637, they began configuring the aircraft for approach and landing, and initiated the landing checklist.
At 1638:21, FAB6560 commenced a left turn just before reaching MUSAT waypoint. At the time of the turn, the aircraft was about 600 feet above the ILS glideslope at 184 knots indicated airspeed (KIAS). [ … ]

At 1640:36, FAB6560 descended through 1000 feet above field elevation. Between 1640:41 and 1641:11, the captain issued instructions to complete the configuration for landing, and the FO made several statements regarding aircraft navigation and corrective action.

At 1641:30, the crew reported 3 nm final for Runway 35T. The CYRB tower controller advised that the wind was now estimated to be 150°T at 7 knots, cleared FAB6560 to land Runway 35T [ … ] There was no further communication with the flight. The tower controller did not have visual contact with FAB6560 at any time.
At 1641:51.8, as the crew were initiating a go-around, FAB6560 collided with terrain about 1 nm east of the midpoint of the CYRB runway.

The 4 crew members and 8 passengers were fatally injured. Three passengers survived the accident and were rescued from the site by Canadian military personnel.

Findings as to causes and contributing factors

Biman Bangladesh Airlines flight BG060 was operating flights from DAC to RGN and back to DAC. At (18:03) the Bombardier DHC-8-402 aircraft, registered (S2-AGQ) contacted Yangon control tower and at (18:16) had ILS established and reported to the Yangon control tower....
Read More