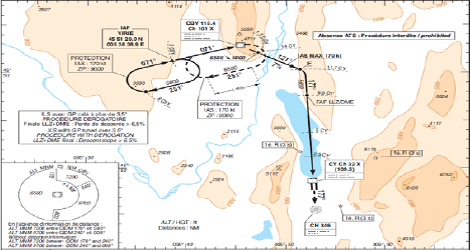 The fight crew of JET 2 flight G-CELC were carrying out an ILS approach to Chambery Airport, in IMC, with the autopilot engaged and the LOC (localiser) and VS (vertical speed) modes selected. The crew reported that they had observed some anomalies with the ILS and DME information before and during the approach.

Final descent, at a high rate of descent, was initiated from an altitude of 5,000 ft, with the JET 2 flight G-CELC established on the localiser but two dots below the glideslope.

At a range of 8.6 nm from the runway and at 1,125 ft agl, an EGPWS Mode 2 Terrain and Pull Up warning activated. The co-pilot had just initiated a go-around and the pitch attitude was increased to a maximum value of 32.7° nose up.

The aircraft climbed clear of terrain, returned to the holding fx and a second approach was carried out successfully.

There was no evidence of any signal interruption or failure of the CY ILS or DME at Chambery. A routine JET 2 flight G-CELC inspection two and a half months prior to the incident showed the ILS to be serviceable at that time and there had been no reports of any failures since then. The aircraft’s navigational equipment was found to be serviceable when tested after the event. Thus, while an onboard or ground-based malfunction or interruption is possible, it would probably only have been of short duration.

The reason for the loss of the commander’s localiser and glideslope signals could not be determined. However, the second and third recorded events of NCD during the descent were probably as a result of him cycling the AUTO/MAN switch.

Standard operating procedures are designed to assist with identifying and managing navigation interruptions and failures. On this occasion, the commander’s attention was diverted for a short time while he resolved his ILS display problem and responded to a call from ATC. During this time, the co-pilot initiated a descent, at an excessive rate, before the JET 2 flight G-CELC had reached the final approach fix, possibly in response to a movement of the glideslope pointer.

The commander remained unaware of the descent profile until his attention returned to monitoring the fightpath. At that point he questioned the situation with the co-pilot. The discrepancy was acknowledged between the pilots and the co-pilot initiated a go-around.

As the EGPWS warning sounded, the co-pilot of JET 2 flight G-CELC increased the pitch attitude to achieve a maximum rate of climb.

At its minimum height the aircraft was crossing a ridge of high ground.

This gave rise to a very high terrain closure rate and generated the EGPWS warning.

The terrain clearance was never less than 1,100 ft.