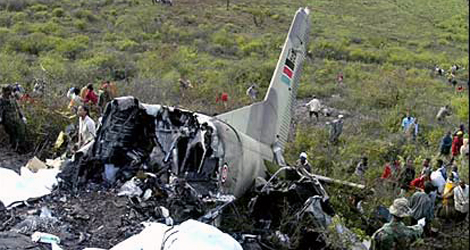 During the night of 04th May 2007, the B737-800, registration 5Y-KYA, operating as Kenya Airways flight KQA507 from Abidjan international airport (Cote d’Ivoire), to the Jorno Kenyatta airport Nairobi (Kenya), made a scheduled stop-over at the Douala international airport. The weather was stormy. Shortly after take off at about 1000 ft, the aircraft entered into a slow right roll that increased continuously and eventually ended up in a spiral dive.

On the 5th May 2007 at approximately 0008 hrs, the airplane crashed in a mangrove swamp South-SouthlEast of Douala.
All 114 occupants on board Kenya Airways flight KQA507 were killed and the airplane was completely destroyed.

0006:09: The landing gear is retracted. As soon as the airplane is airborne, it has a net tendency to roll to the right; the pilot reacts immediately by input of 300 of left roll on the control wheel, and then turns the wheel back to the neutral position and continues to modulate left control wheel to maintain wings level. The bank angle of Kenya Airways flight KQA507 stays within the limit of 3° right.

The captain continues to make inputs on the flight controls, (roll), to the left between 500 and 1000 ft; the tendency of the airplane to roll to the right is controlled and bank angle remains at less than 1°, During the same period, several inputs on the pitch trim for nose up attitude are also apparent.

0006:40.8 : Climb power is selected, FO calls “N1”. The roll command bar of the flight director starts moving to the left.
The FDR indicates :

00:06:41.8: The Captain of Kenya Airways flight KQA507 calls: “OK COMMAND” ; The FO does not respond. The FDR indicates several inputs on the pitch trim for nose up, due to the speed trim system; The autopilot is not engaged.

0006:49: The roll command bar of the flight director moves to the left. The FDR indicates:

0006:59: The FO initiates change of altimeter setting. Both pilots execute the change and mutually verify it. The FDR indicates:

0007:23: At 2770 ft, without any call, the “CMD A” mode of the autopilot CAP is engaged; Action on the flight controls decreases. Some action on the right rudder pedal is perceptible. The bank angle, which reaches 50°, tends to stabilize.

The bank angle of Kenya Airways flight KQA507 increases continuously by itself very slowly up to 34 degrees right and the captain appears unaware of the airplane’s changing attitude.

0007:28: Intense action on the flight controls resumes; first roll movement to the right, then to the left and again to the right. Several bursts of rudder inputs are made to the right. The Captain announces “we are crashing”. The FDR indicates:

0007:29: Uncoordinated movements of the flight controls increase, coupled with bursts of right rudder applications .The FO confirms: “right, yeah we are crashing right”. The bank angle reaches 70° to the right

0007;31: Prolonged pressure on the right rudder pedal is perceptible while the roll control wheel is moved from left to right and then completely to the left. The FDR indicates:

The F/O calls out to the Capta in to level the wings by the right, then quickly correct himself and says with insistence “Left, Left, Left captain ” ..

Inadequate operational control, lack of crew coordination, coupled with the non-adherence to procedures of flight monitoring, confusion in the utilization of the AP, have also contributed to cause this situation.