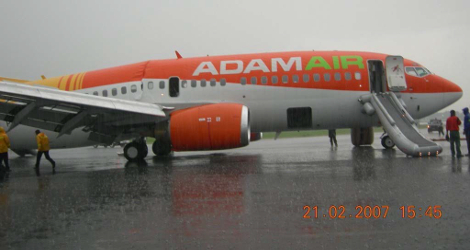 Adam Sky Connection Airlines (Adam Air) on a scheduled passenger flight from Soekarno-Hatta Airport, Jakarta to Juanda Airport, Surabaya, East Java. There were 155 persons on board, consist of 7 crew and 148 passengers.

During the flight there was no abnormality declare by the flight crew.

Weather condition at Surabaya was thunderstorm and rain, wind 240/7 knots with visibility 8,000 meters.

The CVR (Cockpit Voice Recorder) of Adam Air flight KI17 revealed that there was conversation in the cockpit that was not related to the progress of the flight, the conversation was relating to the company fuel policy and training program until 2000 feet.

The CVR of Adam Air flight KI17 did not reveal approach briefing and any checklist reading.

Prior to touchdown, control of the aircraft was transferred from co-pilot to PIC.

The CVR recorded that the Ground Proximity Warning Systems (GPWS) warned “Sink Rate” and “Pull Up”.

The right wheel track was found out of the runway for about 4 meter away and return to the runway. The aircraft stopped for about 100 meters from taxiway N3.

After aircraft touched down, the fuselage aft of passenger seat row 16 was bended down. The passengers were panic. Flight attendants evacuated the passengers via all exits available and door slides were inflated.

The FDR of Adam Air flight KI172 indicated that the vertical acceleration at the time of first touch-down was 5G.

The two passengers were minor injured, and the aircraft suffered severe damage.

From the findings, it is concluded that Adam Air flight KI17 experienced excessive sink rate upon the touch-down.