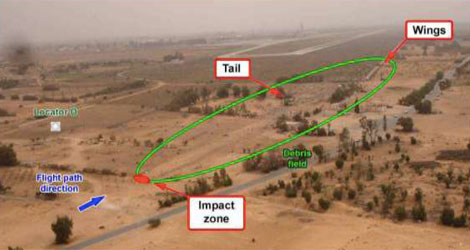 Afriqiyah A330-202 registration 5A-ONG was on schedule flight from O.R Tambo International Airport – Johannesburg (South Africa) to Tripoli international Airport (Libya).The Aircraft took off on May 11th 2010 at 19:25 UTC flight number (8U 771). There were three cockpit crew, eight cabin crew, and 93 passengers on board, with fifty thousand Kgs of fuel during takeoff roll and the Aircraft mass was 187,501 KGs.
During final approach towards runway 09 at Tripoli international Airport, the crew announced go-around and initiated the missed approach procedure with the knowledge and confirmation of Tripoli tower. During the missed approach phase, the 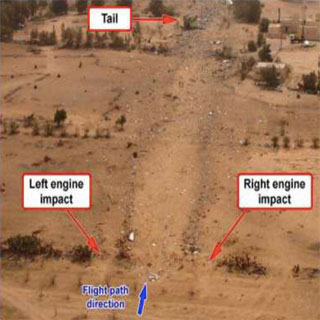 Aircraft responded to the crew’s inputs, velocity and altitude increased above the MDA, then Aircraft descended dramatically until collided with the ground about 1200 meters from the threshold of the runway 09 and 150 meters right of the runway centre line, impact and post impact fire caused complete destruction to the Aircraft.

The aircraft impacted with ground with 260 knots of ground speed and a vertical speed off – 4400 ft/min.

A final approach carried out in common managed guidance mode should have relieved the crew of their tasks.
The limited coordination and cooperation between the two crew members,especially the change into vertical selected guidance mode by the PF, probably led to a lack of a common action plan.
The lack of feedback from the 28 April 2010 flight, flown by the same crew on the same aircraft, did not allow them to anticipate the potential risks associated with managing non-precision approaches.
The pilots’ performance was likely impaired because of fatigue, but the extent of their impairment and the degree to which it contributed to the performance deficiencies that occurred during the flight cannot be conclusively determined. During the go-around, the crew was surprised not to acquire visual references.
On one hand the crew feared exceeding the aircraft’s speed limits in relation to its configuration, and on the other hand they were feeling the effects of somatogravic illusion due to the aircraft acceleration. This probably explains the aircraft handling inputs, mainly nose-down inputs, applied during the go-around. These inputs were not consistent with what is expected in this flight phase.
The degraded CRM did not make it possible for either crew member to identify and recover from the situation before the collision with the ground, even when the TAWS warnings were activated close to the ground.

Based on elements from the investigation, the accident resulted from: