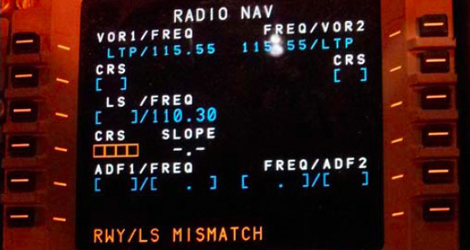 The crew took off from Ajaccio bound for Lyons Saint-Exupéry. The flight was chartered by Air Méditerranée and performed by Hermes Airlines.

The Captain was the instructor (PNF) and was sitting in the right-hand-side seat. The student /pilot in-command was PF in the left seat.

When preparing the radio navigation for takeoff, the PNF manually entered the frequency of the Ajaccio AC ILS in the NAV RADIO page of the multi-function control and display unit (MCDU) to prepare for a possible quick return flight (QRF). This frequency remained selected throughout the flight until the approach.

The flight was carried out with the AP1 autopilot engaged.

During the flight, the crew listened to the ATIS which stated that the ILS approach to runway 18L was in force. They programmed the navigation system (Flight Management Guidance System – FMGS) for this approach. When the aeroplane was cleared for an arrival at PINED 1, the approach controller announced low wind and suggested radar vectoring for an ILS approach to runway 36L, which was accepted by the crew.

It was dark and instrument meteorological conditions (IMC) applied.

During this arrival, the crew noted inconsistencies in the DME distances displayed on the ND: the PNF called out 99 NM and the PF 40 NM.

About one minute after the beginning of radar vectoring, the controller, who realized that the aeroplane was high on the glide, asked “…forty nautical […] is that OK for you, four zero?“.

The crew, while programming the FMGS for an ILS approach to runway 36L, answered “Actually we… we’ll need to make a thirty six“.

The controller, who interpreted the response of the crew as a confirmation of a landing on runway 36, did not understand that the crew wanted to make a late turn onto heading 360. He provided a heading of 315° to the localiser axis for runway 36L.

As the Ajaccio AC ILS had not been deselected, the FMGS did not automatically select the ILS for runway 36L at Lyons.

About three minutes later, the controller gave a heading of 270° in order to extend the flight path as the aeroplane was too high on the glide. The crew was busy solving the inconsistency in the ILS frequency display and, due to a readback error by another crew, turned thirty seconds later.

About 30 seconds later, noting that the aeroplane had overshot the axis, the controller ordered the crew to follow a right heading of 020°, to descend to 3,000 ft and then cleared them for an ILS approach to runway 36L.

The ILS frequency switched from 110.30 MHz (Ajaccio ILS frequency) to 110.75 MHz (ILS frequency of runway 36L at Lyons Saint‑Exupéry). The aeroplane then crossed the localiser axis for a second time. While the Capture mode engaged for a selected altitude of 3,000 ft at a speed of 240 kt, the crew decided to select an altitude of 400 ft on the control panel (FCU), which caused a mode reversion of the autopilot from ALT* to VS 1200 ft/min, the current vertical speed of the aeroplane at that time.

They set the approach mode and engaged the AP 2 autopilot. The crew turned left to intercept the localiser axis, and then the aeroplane descended below the radar minimum safe altitude of 3,000 ft. The controller asked the crew whether they had the correct ILS frequency, which they confirmed.

While the aeroplane was in clean configuration at a speed of 230 kt and an altitude of 2,460 ft (height of 950 ft), the GPWS “TERRAIN TERRAIN PULL UP PULL UP” alarm sounded. The instructor took over sole control of the inputs, pushed the thrust levers to the TOGA detent and selected a maximum pitch attitude of 9.5°, without calling out that he was taking over control. Autopilots AP 1 and 2 disengaged. The airplane being in clean configuration, the SRS mode did not engage and did not give the crew the expected nose-up instructions corresponding to the avoidance manoeuvre in progress.

The vertical and horizontal guidance modes VS -1200 and HDG were still activated. When the pitch attitude of the aeroplane reached 9°, the instructor applied nose-down inputs. In response to an MSAW warning that triggered a few seconds later, the controller called out: “you maintain 2,500 ft, you are too low, you are below the glide” and requested to be called back once the aeroplane was established on the glide path. The aeroplane was at 2,420 ft in a climb. The instructor continued applying nosedown inputs while converging on the localiser axis and simultaneously acknowledged the message. He probably tried to stabilise the aeroplane at an altitude of 2,500 ft.

The nose-down inputs were maintained for about twenty seconds. The thrust lever was positioned in the CLIMB detent. At this moment the crew was waiting for the controller’s instruction to climb. The calibrated airspeed increased sharply and the aeroplane started to descend again to an altitude of 2,150 ft. At 320 kt and a height of 900 ft, the thrust levers were positioned in the IDLE detent. At this time, a second MSAW alert was triggered. The controller intervened again: “…check your altitude immediately, you are too low“.

A few seconds later the student in the left seat applied nose-up inputs on the sidestick for about ten seconds while the instructor was applying nose-down inputs. The aural and visual DUAL INPUT warning triggered for a minute.

During this dual input phase, the PNF continued to communicate with ATC and requested radar vectoring to abort the approach. Communications, probably referring to taking over control, were confused “PF: “[leave it, leave it]”, PNF “[you take it]”, PF “[I have the controls, 5,000 ft, leave it, 5,000…. ;]”. The controller asked the crew to climb to 5,000 ft. As the instructor applied nose-up inputs the student applied nose-down inputs. During this period the aeroplane climbed. The crew placed the thrust levers in the CLIMB detent. The DUAL INPUT warning stopped. The instructor in the right seat then took over the controls. The AP2 autopilot was connected. The aeroplane parameters stabilised. A second approach was performed and the crew landed on runway 36L.

The serious incident was due to: 